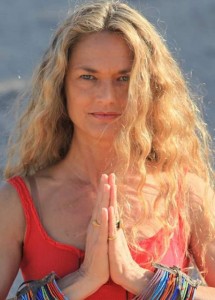 Colleen Saidman Yee graduated from Jivamukti’s yoga teacher training program in 1998 and has been teaching ever since. In 1999, she founded Yoga Shanti in Sag Harbor, New York. She has been featured in dozens of Gaiam yoga videos and has appeared in The New York Times, New York magazine, Vanity Fair, O: The Oprah Magazine, and Yoga Journal, among many other online and print publications. Colleen’s book, Yoga for Life: a Journey to Inner Peace and Freedom was published in June 2015.

Along with her husband Rodney Yee, Colleen has created and is featured in the new GaiaTV Yoga Foundations Guide (gaia.com). Together they are co-owners of Yoga Shanti New York City and Yoga Shanti Westhampton Beach, and are Co-Executive Directors of Donna Karan’s Urban Zen Integrative Therapy Program. They teach workshops, retreats, and teacher trainings worldwide, and maintain public teaching schedules at Yoga Shanti in Sag Harbor and New York City.